While the messy roommate and the inconsiderate roommate may be sometimes one in the same, it’s not always the case.  Sometimes you just have a roommate who plays their music on high until 3 am, takes your food from the fridge, and doesn’t do their fair share of the chores.  What do you do about this type of roommate?

Well it’s a little bit harder with an inconsiderate roommate than just a messy roommate.  This is because there are generally a whole range of different behaviors you have a problem with; not just one.  However, like with the messy roommate, you should certainly talk with them about what is bothering you the most about their behavior.

With any sort of discussion like this, the first thing you want to do before you even talk with your roommate, is to think about what are the things that are really bothering you and how you will handle the situation.  It is best to come up with your responses to the possible reactions your roommate may have about the situation.

When you’ve decided what you’re going to say and when you’re going to say it, you should be sure that you avoid approaching this situation as a “confrontation.”  You should avoid thinking about these types of situations as a “confrontation” because this will automatically freak you out and will cause you to react poorly.  It’s best to keep an open mind and go into the situation thinking about a positive outcome for both you and your roommate.  This will keep both you and hopefully your roommate, positive.

Like with any discussion of this nature, it’s also best to focus on the specific behaviors that bug you the most, and avoid blaming it on personality flaws.  It will not only cause your roommate to become defensive, and possibly hostile, but it will also ensure that you will have a less-than-satisfying outcome to your discussion.

Overall, with any problem you experience with your roommate, it’s best to come at the situation with an idea of what you’ll say, an idea of how both of you will react, with hope for a positive outcome, and an understanding its not a personality flaw that is causing the problem.  While it may seem like a lot to remember, having that sometimes-difficult discussion will not only be better for your psyche, but it will be better for your roommate, and the relationship.

Your roommate seemed cool until you noticed that they started appearing right behind you every time you turn around.  You also started to notice that they invite themselves out with you when you’re going out with your friends.  They’re there when you wake up, when you go to sleep, when you eat, when you study; you’re even half-expecting them to be standing just outside the curtain when you shower!

Scene from the film “The Roommate” directed by Christian Christiansen
Photo from http://www.totalfilm.com

You’re starting to feel creeped out (if you haven’t already been creeped out after that time she somehow ended up in your closet), and you need to do something about it.   But let’s be honest:  How can you tell someone gently that they’re officially creeping you out?

Be sensitive, be kind, and be honest.  The key here is to not say what is exactly on your mind; don’t tell your roommate that she’s creepy and that you think she has dependency issues.  That will only make matters worse.  The other thing you want to avoid is completely ignoring her; don’t just stop talking to her because you think she’s creepy.  This is because 1) there is most likely a reason for why she’s developed a sort of dependency on you, and 2) she has feelings just like you do. While, like we said, it’s not a good idea to tell her you’re creeped out, you definitely want to let her know that what she’s doing is not making you feel comfortable.  Think of the reasons why it doesn’t make you feel comfortable, and explain this to her.  You just have to be cautious when doing this because, like we said, she is most likely doing this for a reason. Be sensitive to that; use statements that focus on the specific actions she does and how that makes you feel rather than focusing on her flaws.

Avoid blaming her and criticizing her for anything.  You don’t want to blame her for why you’re friends don’t seem to want to hang out at your place anymore, or why, for some reason, she widens her eyes when she’s watching you eat your breakfast.  Be sensitive and considerate to her feelings.

Be calm, respectful, and level-headed.  This is not the time to freak out on her for other things she’s done and it’s not the time to completely diss her.  You want to plan out what you are going to say ahead of time and consider her feelings when you say it.  You also want to give her a chance to speak; maybe this way you can get some insight as to why she follows you around.

Overall, no matter what kind of roommate you have, it is always important to talk to them when issues come up.  The best thing you can do is be honest, be respectful, be calm, and be considerate, because you’re roommates: You need your space, but you also need to live together peacefully (for both your sanity). 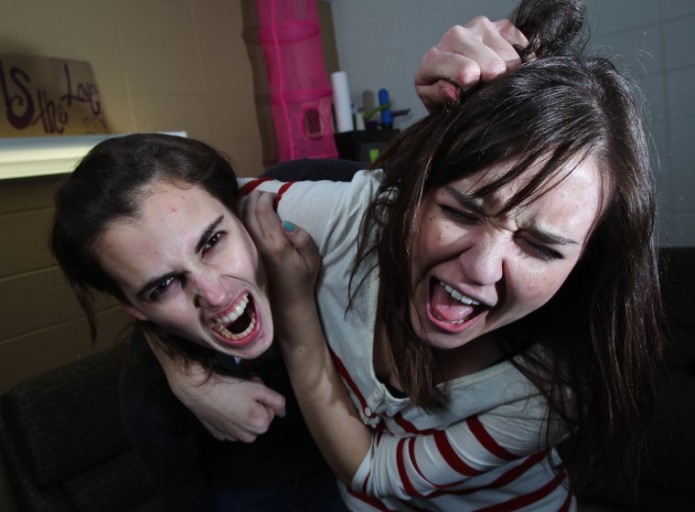 More often than not, you’ll find yourself in a disagreement with your roommate. While not every disagreement will end in a full-blown fight, there may be times when it will.  The only thing you can do is to prepare yourself for those times and to be ready for anything.

For example, say your roommate has been having their significant other over to your place too much.  When you go to talk to them about it, they get defensive and the issue never gets resolved.  Let’s say that after that point it gets very awkward around your place and you end up leaving each other notes, ignoring one another, and/or just not speaking.  What would you have to do?

In every case, you should always try to talk with your roommate again.  Avoid leaving passive aggressive notes for one another (you can see why that might not work on www.passiveaggressivenotes.com) and giving them the silent treatment.  It’s time to act like adults; you’re in college (or maybe out of college, depending on who’s reading this).  Take some time and plan out what you’re going to say to them.  Focus on how their actions make you feel and avoid making it about defects in their personality.

You also want to be sure to talk to them when you are calm and levelheaded; they won’t listen to you if you scream at them.  Be sure to detail your feelings, but also be sure to listen to what they have to say.  No matter what, try hard not to take things too personally or become too defensive; this only makes matters worse.  Instead, try to think logically about what they have to say; this means being able to criticize yourself.  What could you be doing to upset them?

If talking with them doesn’t seem to work and it only seems to make things worse, the only thing you can really do from there is to be civil to one another.  Maintain your consideration and respect for one another.  Being roommates doesn’t necessarily mean you have to be friends, or that you even have to like each other; just as long as you respect one another and are considerate, your relationship (or lack-there-of) can work.

While fighting with your roommate can be traumatic, it happens to a lot of people.  The only thing you can do is prepare yourself for those scenarios when it doesn’t work, and sometimes you do just have to concede that you don’t see eye-to-eye or that you just don’t get along.  Although it stinks when you and your roommate don’t get along, it is better that you both can at least come to an understanding and share mutual respect for one another and your space.

Have you ever had a roommate that would leave you notes when you left dirty dishes in the sink, forgot to clean up your things off the kitchen table, or you had your friend over until 5 am?  Have you ever been that roommate?  If you’ve ever been in that situation (no matter what role you played), in most cases, in never ends well.  This is because there is a lot more behind that note than you may initially think.

Passive aggressive notes could mean one of two things:

The person doesn’t feel like they can talk to you.  Maybe you give that aura of “Don’t mess with me,” or maybe they’ve just never experienced a problem with a roommate before and they don’t know what to do.  The person could also just be afraid of confrontation, and this is their alternative to actually confronting you about the problem.

You aren’t around for them to yell at, so they leave you a note instead.  If someone is extremely frustrated, and you aren’t around, they may take out their frustration in note form.  It’s not the best option, but it certainly happens.

Sometimes it’s easy to see which option it is, especially when you know the person well, but then sometimes it isn’t.  You need to think about what motivations they might have for writing a note like that and what might have you done to make them do that.  You should go speak with your roommate about the note, because you don’t want to let things like this make the relationship worse.  I say worse, because, let’s face it:  your relationship is already not on the best of terms if you’re writing passive aggressive notes to one another.

Here are some tips for talking with your roommate about their passive aggressive notes:

Think about what you’re going to say before you talk to them.  Like we said in our previous posts about roommate relationships and conflict, it’s best to go into a situation prepared.  You want to plan out what you want to say and how you will say it.

Act calmly and rationally.   Perhaps the worst thing you can do is to lash out and make accusations or make unrelated arguments about other things the person has done to frustrate you.  Remember:  You need to act instead of react.  This means that you should act on the situation, i.e. talk with your roommate about your relationship, why they are leaving you notes, and what you can do to fix it.  You don’t want to react to their note, meaning that you don’t want to go with your automatic and “gut” reaction to how that note made you feel.  While both you and your roommates feelings are important and should be acknowledged, you don’t want to take out those feelings on your roommate.

Perhaps the overall moral of the story is to be considerate and to have open communication between you and your roommate.  It will be significantly more successful, and significantly more valuable, for you to talk with them instead of resorting to notes, because your reaction (or their reaction if you’re the offender) says it all.  Don’t write passive aggressive notes to your roommates.